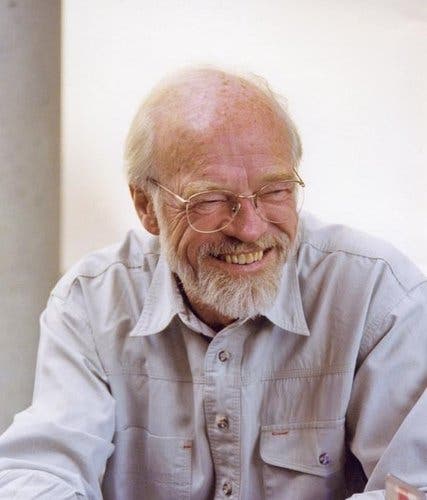 Rev. Eugene H. Peterson, a Presbyterian minister who challenged the mass marketing of Christian evangelism and wrote a shelf of books on religion – notably The Message, a series that recast the Bible into everyday English – died on Monday at his home in Lakeside, Mont. He was 85.

Amy Peterson, his daughter-in-law, said the cause was congestive heart failure. Mr. Peterson, who had dementia, had been in hospice care.

For most of his life Mr. Peterson was a small-town pastor and college professor who spread the Gospel with paperback books and with his sermons and ministration to a few hundred parishioners. But he became an influential voice of American evangelism in his 70s, after the publication in 2002 of his full translation of the Bible, which sold 15 million copies worldwide and lifted him out of anonymity.

He added: “American culture is probably the least Christian culture that we’ve ever had, because it’s so materialistic and it’s so full of lies. The whole advertising world is just intertwined with lies, appealing to the worst instincts we have. The problem is, we have been treated as consumers for so long they don’t know any other way to live.”

Mr. Peterson’s entire pastoral career unfolded in a single small church that he founded in 1963: in Bel Air, Md., a suburban town of 8,000 northeast of Baltimore. Affiliated with the Presbyterian Church USA, his parish began with a few dozen people; decades later it had only 500 members and Sunday service attendances of about 250.

He liked to be called Pastor Peterson or Pastor Pete. “Ours was an informal congregation, and except for children and youth, most of the people in it were older than I and addressed me by my given name, Eugene, which was fine by me,” Mr. Peterson wrote in “The Pastor: A Memoir” (2011).

That book recounted his years of service as the pastor of Christ Our King, a long panorama of births, deaths, ceremonies, sermonizing and counseling that seemed somehow to be embodied in a crowd of children that suddenly appeared at his living room window, trick-or-treating on his last Halloween before he retired from the ministry in 1991.

“Masked and costumed, their noses pressed against the glass, they were unrecognizable as the children I had baptized, children of parents I had married, children whose grandparents I had buried over a span of three decades,” Mr. Peterson recalled. “But they recognized me: Pastor … Pastor Pete.”

Giving up the ministry for an academic life, Mr. Peterson was the James M. Houston Professor of Spiritual Theology at Regent College in Vancouver, British Columbia, from 1993 to 1998. He continued teaching there as an emeritus professor until 2006.

He began writing books in the 1980s, at first commentaries on religious subjects, like “Run With the Horses: The Quest for Life at Its Best” (1983). He later took up pastoral themes, including “Like Dew Your Youth: Growing Up With Your Teenager” (1994) and “Leap Over a Wall: Earthly Spirituality for Everyday Christians” (1996).

Mr. Peterson, a linguist who once taught Hebrew and Greek to seminarians, wrote more than 30 books in all, including a number of volumes that were assembled into his best-known and most successful work, “The Message: The Bible in Contemporary Language” (2002).

Written and published in many segments over a decade, Mr. Peterson’s literary centerpiece was a translation and paraphrasing into idiomatic English of early Hebrew Aramaic and Greek texts that were the basis for the King James Version of the Bible which first appeared in 1611. He used poetic expressions, slang and other modern literary devices.

His stated goal was to render texts that had been obscured by time and modified by other translators into fresh meanings accessible to American readers. The collection was well received in evangelical circles; one volume, “The Message: The New Testament in Contemporary Language,” won the Gold Medallion of the Evangelical Christian Publishers Association in 2003.

Many readers wrote to Mr. Peterson, and to his publisher, the NavPress Publishing Group, to say that his work had given them a spiritual catharsis. But some Bible scholars said Mr. Peterson’s free use of breezy slang, colloquialisms and eccentric paraphrases, along with colorful expressions that bordered on cartoonish, had distorted much of the meaning of the original texts.

Following are two passages, one from the King James Version, the other Mr. Peterson’s.

The Lord is my shepherd; I shall not want.

He maketh me to lie down in green pastures: he leadeth me beside the still waters.

I don’t need a thing.

You have bedded me down in lush meadows,

you find me quiet pools to drink from.

Our Father which art in heaven, Hallowed be thy name.

Thy Kingdom come, Thy will be done on earth, as it is in heaven.

Our Father in heaven,

Reveal who you are.

as above, so below.

Eugene Hoiland Peterson was born in East Stanwood, Wash., on Nov. 6, 1932, to Robert and Evelyn (Hoiland) Peterson. Eugene and his siblings, Karen and Kenneth, were raised Pentecostal Christians in Kalispell, Mont. Their father was a butcher, their mother an ordained Assemblies of God minister.

Eugene graduated from Flathead High School in 1953 and from Seattle Pacific University in 1957 with a degree in philosophy.

In 1958, he married Janice Stubbs. She survives him, as do their three children, Karen, Eric and Leif Peterson; nine grandchildren; his brother; and his sister, Karen Finch.

Mr. Peterson earned a degree in spiritual theology from the Biblical Seminary of New York (later the New York Theological Seminary). After taking a master’s degree in Semitic languages from John Hopkins University in Baltimore, he returned to New York, joined the biblical seminary’s faculty and taught Hebrew and Greek, intending to become a language professor.

Although he had been ordained by the Presbyterian Church USA for teaching purposes, he had never seriously considered life as a minister. But in 1962, his denomination asked him to found a new church in Bel Air and to become its pastor.

He took the plunge, and found an adventure.

“It wasn’t much,” Mrs. Peterson recalled in a recent interview for this obituary. “We started in our home, in our basement. Eugene went knocking on doors, telling people we were beginning a new church. And that first Sunday, 46 people showed up.”

It was a revelation for Mr. Peterson. “I thought, ‘Wow, the church is a lot more interesting than the classroom,'” he told Religion News Service in 2013. “There’s no ambiguity to Greek and Hebrew. It’s right or wrong. And in the church, everything was going every which way all the time – dying, being born, divorces, kids running away. I suddenly realized that this is where I really got a sense of being involved and not just sitting on the sidelines as a spectator, but being in the game.”